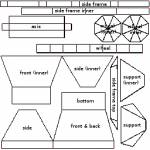 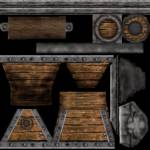 I better write some tipps & tricks in the wiki.
Quickreply NewtonReply

>or in openclonk-wiki(When it's exist.)?

It already exists. It is used as the CMS of this site (see)
Quickreply ZapperReply 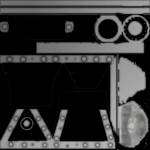 As you see, I painted geometric details such as nails, the gaps between the wooden boards and the metal suports. So, the texture map is not just a color map, I used it to create the same illusion as you would get through normal maps. The metal supports are a good example, you see that the top of each is lighter and the bottom of it is darker (casts a shadow on the wood) which looks like the metal support is somehow in front of the wood, rather than on the same layer.
Of course, I assumed that the lightning will come somewhere from the top / front. On small models like this, with texture maps this small, to use normal maps is imo overkill as almost the same illusion (normal maps also only create an illusion) can be achieved with this method with much less effort and no extra maps.
The only downside is, is that the details don't look so convincing if the (only) light comes from the side. But this won't be so much of a problem in OC as there will be always some diffuse light coming from the front/top, I believe.
We can test normal maps with organic models like clonks, animals etc. There is would make much more sense, too.
Quickreply NewtonReply

Date 2009-07-07 19:48
:/ I dont think so. A normalmap and in this case (because there is wood AND metall) especially a specularmap would really improve the graphics-quality.
Quickreply MrBeastReply