I made the superflint to experiment in low-poly-modelling, uv-mapping and texturing. After I did the texture it occured to me that splitting the uv mesh along the seam of the yellow stripe might have been a lot more useful, but I think the result came out okayish anyways, so I didn't want to start over - Still, there's a possibility that I might redo the whole thing sometime. Any feedback? ;)

I hereby license the following file(s) under the CC-by license
Attachment: superflint.obj (8k) 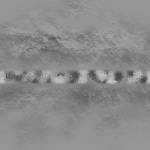 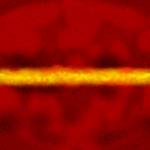 *Sigh*, there is no chance to replace the flints with more interesting explosives, is there?

Just make the texture seamless and all is good

I always imagined the flints basically as red and rocky stones of volcanic origin. If split up, the rock would reveal a explosive substance which looks like lava. The red is just a thin shell to the outside which cracks open on impact and thus explodes. Thus, I would like to see that the new flints resemble more this idea: 1. No ball-shape anymore but different rocky shapes, 2. rocky texture with cracks and indications that behind this thin shell of red rock, there is a glowing lava-like substance.
Quickreply NewtonReply

Well, Flints are one of the most basic and unique elements of clonk - I can't come up with something more interesting that might also be found as a natural occurence in the earth. Yet we might consider removing all but the normal flint and add more constructable explosives like bombs and dynamite with other functions than exploding on contact - of course, this would alter fighting in Clonk a lot, but might be just one of the gameplay changes we try to archieve ;)

Edit:
I can't make the texture exactly seamless, because the uv-mesh has an rather obvious seam direktly on the "back" of the flint which doesn't fit to the edges of the texture.
Quickreply MatthiasReply

Yeah, the idea of having this explosive material in the earth is nice. But does it HAVE to be a glaring red ball?
Quickreply NewtonReply

No, you can't explain flints away with volcanoes. No flint survives a volcano. They also wouldn't survive any other plausible history of the landmass, so we should just embrace the silliness and admit that flints are there because explosions are cool. On that thought, how about glowing flints? To emphasize the magic that they are?
Quickreply GüntherReply

Imo, it's more important that objects look *different* than whether they look correct by some weird definition.

Keeping that in mind: Objects should have more characteristic shapes. For example, rocks could have random, sharp-edged shapes. Flints could be round. Loam could come in square cubes. Concerning loam, we could also abolish it and allow construction of bridges just using earth.
Quickreply Sven2Reply

Date 2009-07-14 14:16
Imagine you dig all earth away and get with the bridges out of the earth for example in Dragonrock up to the Princess Oo
Quickreply EnriqueReply

Scenarios would have to be designed differently.

Date 2009-07-16 20:00
If it is a rule it it would be bether that the bridge build of earth is only half large as the one build of loam.
Quickreply EnriqueReply

But it should be at least as long as the loam bridge is on Rage. Otherwise it would be pain to use it. Maybe we should make loam even longer then. Well, do we really need loams anyway at all?
Quickreply ApeReply

Date 2009-07-16 20:56
Yes i do think so. It is cheaper than metal, can also be digged out, and should be better than earth, like in the idea posted of the value of a material.
Quickreply EnriqueReply

Date 2009-07-16 22:29
I don't think there's way to design something to work with these "new" bridges. (Except creating a new material that looks like earth).
Quickreply FireknightReply

Flints are an effective method to provide the player with basic explosives at the beginning of the game. Otherwise we need another technique for the player to gain the first resources (a pick-axe?).
The only other kind of explosives I can imagine right now are some kind of a gunpowder grenade (http://upload.wikimedia.org/wikipedia/de/thumb/e/ef/Old-granate.jpg/180px-Old-granate.jpg) which would need a lot of materials to be plausible (gunpowder + metal, gunpowder from sulphur or in a pseudo realistic way sulphur + coal).
These grenades could replace the normal flint by exploding on contact (then we have replaced a red ball with a black ball with the difference that the black one is harder to acquire) or the T-Flint with delay (that does not solve the problem cause I think we do need anything like the basic flint).
Why do I think we need anything alike the flint? Mainly for the mining reason. We may abandon the flint if we implement something like the pick-axe (or any kind of easy to access explosive). The clonk to clonk combat will be improved by the weaponry everyone plans to contribute, the combat against buildings may be fought with refined explosives (I even thought that the rocks may damage building when fast enough like shot from a cannon).
Anyway, I think the basic flint is versatile and funny enough and solves a lot of problems. The better flints are another story. For these are mostly used for destroying buildings or advanced mining it's possible to remove them. In that case the above-mentioned grenade would fit (with a little delay and a sticky function?). That would provide us with the opportunity to provide the flint a more pleasant look cause there are no more several red balls the player needs to distinguish between. The flint could get some yellow veins or so. And I think we can save us any explanation why the flints are there and just say that they are there... ;)
Quickreply ClonkonautReply

I like the pickaxe-idea, I think it's interesting to be able to mine without any form of explosive (and thus without dependency on sulphur ressources or homebase material) whatsoever.
While I am not sure whether it is a good idea to remove the natural flint from the game, I agree that the higher Flints can be abandoned and new explosives should be introduced. For example, to mine efficiently, one could rather construct a few bars of dynamite, place them, and fuse them via remote-detonator similar to the old western dynamite.
Quickreply MatthiasReply

>and fuse them via remote-detonator similar to the old western dynamite.

I would like the player to have to fuse the stuff manually using fire :) (or throwing an explode-on-hit-bomb on the bigger explosives)
Quickreply ZapperReply

In that case I would suggest (cause I never really liked dynamite ;) the grenade and a gunpowder filled barrel.
The barrel contains more gunpowder of course but the grenade may be fired from a cannon (and it throws some fragments like the western cannon ball, this could even work against clonks) or whatsoever.
Both may be fused by hand (when firing the grenade should be auto fused or maybe explode on contact). When standing in front of a building you should be able to stick the explosive on the building and when standing next to any kind of ground material you can put the items into it.
Quickreply ClonkonautReply

I want to be able to set up explosive chains!
Quickreply ZapperReply

I'm not sure what you mean by "efficiently". Throwing flints is pretty much the most efficient way to do it. T-Flints are very situational and worse than normal flints in most cases, as you cannot place them very well. The situation could be improved if dynamite "sticks" wherever you activated it (so you can also blast the ceiling); but in most cases, it would still be slower than just throwing a normal flint.

Though I have to admit: The dynamite boxes with their remote switch were kind of funny.
Quickreply Sven2Reply

Of course, using such explosives to mine doesn't make sense unless we abolish super- and teraflints. I actually thought of sticky dynamite - you maybe do remember our (still unfinished) jungle-adventure? The dynamite there is stuck right into the material close to the clonk and takes about two seconds to explode, so you can get your clonk to a safer spot.
Quickreply MatthiasReply

>unless we abolish super- and teraflints.

But I really think we need different kinds of explosions. In strength, size and appearance!
Quickreply ShadowReply

Like the blue ones, the black ones, the green ones. And of course green material may only be blasted by green explosions!
Quickreply ClonkonautReply

PINK TERAFLINTS!
No really, in my interpretation of "appearance" in this context, it is rather the shape of the explosion. Even if that wouldn't make much sense either :)
(or it could be the behavior of the explosives, of course)
Quickreply ZapperReply

Date 2009-07-14 14:20
So we can use the cannonball of western. The cannonball only needs a bigger explosionradius.
Quickreply EnriqueReply

Date 2009-07-28 17:35
In my opinion in OC there should be only one flint, the normal one, which can be found in the ground. The stuff you create in the lab should neither be named flint nor look like a flint. Under this circumstances the visual interpretation of the old flint can be a bit broader. (highpoly-object with complex material, if needed a lowpoly can be done quite easily by projecting to lowpoly).

I think the flint should have a higher recognition value - not looking like some lump of lava.
I think we should keep the dark red - maybe with a bit contrast using bright yellow stripes/dots/pattern
Quickreply ZapperReply

Looks cool! The texture is imo a little bit too lava-lumpy as Zapper said. In any case, can you post the model with the texture here?
Quickreply NewtonReply

Date 2009-08-14 03:56
No i cant, for two reasons:
- seams as i didnt save the model...
- the "material" didnt use any bitmaps, but parameter-generated maps.
If you're intrested, i can try to redo the "model" (its just a highpoly sphere with a fractal-noise-modifier) and its material. Just tell me, what to change.
Quickreply tinuReply

Date 2009-08-14 12:05
You could bake the procedural textures onto an UV-texture.
When you use Blender you simply have to create an UV-Layout, an Image and klick in the bake-buttons "Bake Texture". At the moment I can't find the tutorial I saw on Internet...
Quickreply SimsiReply

Date 2009-08-14 17:59
i know how to do render-to-texture in 3d studio max, but it wont produce exactly the same result. look at the lava-thing, it is not just a texture, its a bit offset to the model.
Quickreply tinuReply

I like this one very much. Perhaps more harder displacement?
Quickreply DragonclonkReply