I finally got around to making a concept model of the tools workshop- if you have any ideas about the design, feel free to comment.

The current colours on the model is not intended to me the actual material; they are simply representations of materials:
Brown-Wood
Grey-Metal
Maroon-Brickwork

By Travis Date 2009-08-10 17:20
I think it's a little bit too cartoonish, I mean the front door and the roof are too big compared to the whole building. I like a more realistic look, like the workshop from the western pack.
Quickreply TravisReply

Hm I still don't know. Perhaps just the "concept" doesn't appeal to me but the real rendering will be great. It looks a bit uninspired to me, but then again, how inspired can a small tools workshop look.
Quickreply NewtonReply

I think what is bothering Newton (and me as well) is that this workshop looks pretty like anyone would imagine a blacksmith workshop or what. A little building and a shack. But for the tools workshop there should be something smaller. As you see we need some more workshops and the first one shouldn't consume the standard design. So this one would fit for the blacksmith.
The tools workshop should look way more kludgy. It is the first workshop in the game, fast build with just the little things you need. So you could leave out the building next to it and just give the shack.
This is a little a sketch of what I had in mind when first thinking about the tools workshop (if we don't want to animate the clonk inside, you could just add a fabric door to hide the insides):

How they make explosives or a lorry at that place?

Edit:  now I got the building order, yeah put some little gas tank (just for the illusion) on the side of your place, for the first little explosives and it is ok.
Quickreply TravisReply

Well you could a little table or somewhat. As we are still not sure what our explosives will look like (and I favour the idea of having something like grenades) they may need some metalwork at all.
But actually I don't know how to fit both, a chemistry lab and a forge, inside one building. Cover the whole front with anything and you you don't need to worry about what the clonk's doing. In that way the construction will lose some details.
Quickreply ClonkonautReply

Instead of the stone oven in the back, one could add a quite large cylinder shaped cast iron stove with a funnel which is open to the inside of the tools workshop shack. I fail to find any images on google images, it just returns things like this but I mean a much simpler thing. Like a erected boiler with a shutter.
To create basic explosives with a mysterious boiler-thingy would be more understandable ;-)
Additionally, I miss a workbench in your sketch. (Perhaps where the stone oven is now)
Quickreply NewtonReply

Some kind of chemical oven, yeah, I think that would fit.
Quickreply ClonkonautReply

I'm thinking of a few additions... maybe we could have a shelf with a few chemical bottles on it? The back wall looks a bit empty when you turn the camera around. Also, you can't see them, but there are two planes on the back wall for alpha-mapped tool textures.

Perhaps you can adjust the style of the workshop (and future buildings) to Mimmo_O's modelling style. He modelled the previous structures to look more "hammered together" (German: zusammengehämmert) and fragile which I think, fits really good to the game.

Overall, I would make the oven even bigger (without the round stuff at the top) and let it occupy the area where the battens are now.
Since this is only a sketch of yours, I can't complain much. I think for the final model, one could add

Hmm, I get the idea. I'll see what I can make look more 'kludgy'.
Quickreply RingwaulReply

Well, finally got around to work on the tools workshop again; didn't change all that much but I think it looks a bit better. Now that I'm not working on personal projects I might be able to get this finished up soon.

I'd like to know how it looks when the boiler to the right is so big that it covers all of the left side, so that even the construction is supported by it and a thick funnel sticks out at the top. Cause right now, the roof still looks somewhat boring.
Quickreply NewtonReply

Fiddled around with the roof a bit. Also, put a stonking big chimney on the stonking big furnace. I don't really like the chimney though. It seems too symmetrical.

Much better! Compare it to your original or to Clonkonauts sketch! :-D The ingame size will be about 60% of your example rendering right now. Two last changes:
Make the chimney square-shaped instead of cylinder-shaped, make the sign a little bit bigger (~150%), turn it left a little (10-15°) and put it on the beam to the right. Texturing the building would be a good challenge... or would you like to do it yourself?

I wonder how it would be possible to animate the usage of the boiler (fire etc). Certainly not with bone animation... hm.
Quickreply NewtonReply

I could have a try at texturing this; I haven't really done much lately.

Well, for me it would be a pleasure: I got some nice ideas for some cool little details we could add in the texture. But if you would like to do it too, I defer to you.
Quickreply NewtonReply

I have started work on the texture; only the roof and sign are untextured. However, if you'd like to improve/redo the texture, that would be great. :) I'm not the best texture artist xD

I hereby license the following file(s) under the CC-by license
Attachment: workshop.blend (196k) 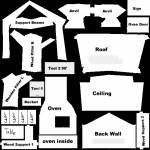 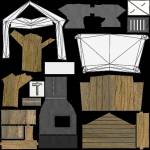 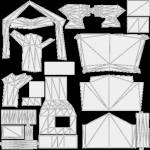 I hereby license the following file(s) under the CC-by license
Attachment: workshop.blend (182k) 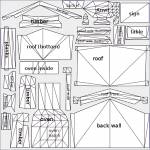 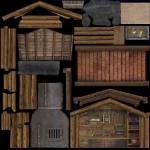 Did you find it here, by any chance? =)
Quickreply NewtonReply