What kind of lichen? What is it supposed to look like?
Just looked for some pictures more like this or that?
Quickreply FoalyReply

It's supposed to be some sort of lichen that grows underground on the background wall. I think you can chop down and eat it. The chopped-lichen object already has a cool graphics imo
Quickreply ZapperReply

>some sort of lichen that grows underground on the background wall. I think you can chop down and eat it.

If it does, it's not supposed to! But yes @near water
Quickreply ClonkonautReply

@graphics: I think it should be bright green, and have a shape which is not too big and attached to tunnel nicely.
Quickreply MaikelReply

I just looked at the script it and it's fuel, as I understand it.
Quickreply PyritReply

Date 2015-04-05 00:08
Don't know if it's been changed, but last time I played, lichen as a fuel was pretty over-powered. One piece could be planted, and you'd eventually have enough of it to power your base just about forever.
Quickreply FluffReply

Don't think it has been thoroughly tested, yet.
Quickreply ClonkonautReply

Hm, but it would be nice to use in scenarios. I'm often annoyed by having to put so much coal into scenarios, especially underground when you cannot substitute wood for fuel. Now I could use Lichen instead.

> It does reproduce, right?

Yeah, it should (untested, I guess). You need a cave + water.
Quickreply ClonkonautReply

Date 2015-04-05 00:07
Huh. Never realised it was supposed to be growing on the background before. I thought it was some kind of bush-thing. (The plant, not the American. Can we George Bush to the game, and players can chop him down for fuel or food.)
Quickreply FluffReply

I've created one, which is meant to look like this kind of lichen. If you like it, I can create a series of graphics of it.
But I think it ended up kind of weird.

I created it in that orange-yellow color, but I also attached a file with a more greenish color (because the current one is green).

I hereby license the file lichen.png under the CC-BY license

I hereby license the file lichen2.png under the CC-BY license

I hereby license the file lichen3.png under the CC-BY license 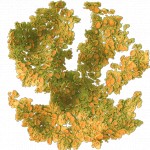 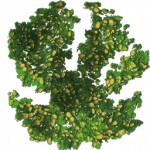 Out of curiosity, how did you make that graphics? Did you create a 3D model (including all those little mushroom-body like things) or did you draw it?
Quickreply ZapperReply

Made with blender.
3 hair-particle systems on a invisible displaced ground plane.
Rendered with cycles.
Quickreply FoalyReply

By Maikel Date 2015-04-06 19:41
Looks very nice, is there a way we can grow it somehow? Maybe dividing the current images in a small core part and arms that grow (instantly). Also it would be nice to have an object you get when you harvest them, maybe this stuff curled up into a ball.
Quickreply MaikelReply

>Also it would be nice to have an object you get when you harvest them, maybe this stuff curled up into a ball.

We already have graphics for that which look good imo :)

By Maikel Date 2015-04-06 20:57
True I will have a closer look to the Lichen mechanics soon, to see what is exactly needed.
Quickreply MaikelReply

By Maikel Date 2015-04-06 21:10
Maybe you can apply the texture of your pictures to them somehow? Is there a model available for these Zapper?
Quickreply MaikelReply

I checked the resource repository and it doesn't look like it. I think Mimmo made them back then and he isn't really active anymore.
Also I think that they look fitting as they are. I doubt anyone actually notices a small texture discrepancy ingame :)
Quickreply ZapperReply

Actually this is a kind of lichen which just grows on rock, so it would not grow branches. But of course I can provide the graphics if you want that.

If you want to take this, then I can create the final graphics with different states of growth.
Quickreply FoalyReply

By Maikel Date 2015-04-06 21:09
I would take it, different stages of growth would be perfect.
Quickreply MaikelReply

I created 4 different growth animations.
If you want it in different colors or if you need more frames please ask.

I don't like the first one but 2-4 are fine with me. I wouldn't mind a little variation, i.e. have all three.
Frame count is okay as it correlates with how many pieces you can gather.

If it's easyenough  for you to make these with the other 2 colour variations, we'd really have a versatile and decorative plant!
Quickreply ClonkonautReply

If the last two stages look too similar, the player (especially new players) will not be able to tell if it's already harvestable or not. In Minecraft this problem is countered with a noticable color change in the last stage of wheat growth from green to yellow. Maybe we shpuld do that too here?
Quickreply PyritReply

By Maikel Date 2015-04-07 16:05
Harvesting works in stages currently (gives you back 1-4 balls of moss), I think we can keep that approach.
Quickreply MaikelReply

This plant you can always harvest. It just gets smaller (and regrows).
Quickreply ClonkonautReply

The .zip contains the anigrabbed sprites + the single frames.
If the resolution is to high, just scale it down, if you need it higher please ask.

I hereby license the file Lichen.zip and its content under the CC0 license.
Quickreply FoalyReply