Currently working on the airplane, I just wanted to showcase my latest changes.

The airplane now has six different firing modes, switchable via the interaction menu: 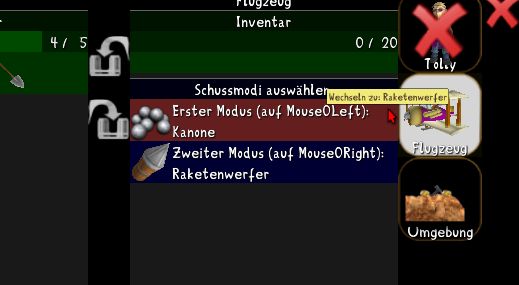 The two it always had:

Boompack shooting
(the rocket targetting effect seems to be broken; pretty sure no one tested this in a long time because before my changes, the rockets simply hit the plane itself)

And four new ones!

Liquid spraying
Using whatever liquid is stored in barrels stored in the plane (of course, with water the spray also extinguishes fires).

Balloon parachuting
With my latest changes, up to 3 clonks can enter the plane. All other actions are only available for the pilot but balloon jumps can be done by any passenger!

Object dropping
Dropping whatever is inside the plane.

Next things is to work on a little bit of effects, e.g. when flying above liquid. I also made the plane float, so landing on water is possible! 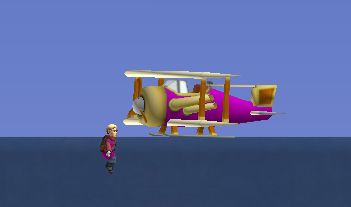 I hope there will be an airplane fight melee soon :-)
Quickreply Sven2Reply

Dynamite boxes are dropped in single sticks. I don't know which of both options would be a better default.
Quickreply ClonkonautReply

By Maikel Date 2017-01-02 18:41
Very nice! One suggestion we might want to try is to have the cycling through the modes on alt use and then just one use. The plane is so fast that when using the E menu I typically hit something.

Also maybe one can show the current mode somewhere visible outside the E menu, suggestion: on the interaction bar image.

I am currently working on some more exotic cannons which might go very well against the air plane. Also trying out a defence scenario where a bit more of base building is involved.
Quickreply MaikelReply

> cycling through the modes on alt use and then just one use.

Oh, yeah. That's a good idea. I kept thinking on a way to quickly change firing modes.
I wanted to show the active mode when entering the plane, then of course when switching it. Interaction icon is also ok!

With your cannons, we could have a nice air/ground battle scenario!
Quickreply ClonkonautReply

Ui! Can you make the plane's take off more reliable? Starting the plane is often a real pain. Look at that ragequit! :D https://youtu.be/j8zLfGNGi54?t=29m30s
And that exhaust smoke could probably be a bit more subtile.
Quickreply PyritReply

Hm. I want to make the plane touchable, so you can push it around. But I will probably disable that for all the missions (too much might get broken).

However, the plane in crash is now turned left (probably due to that video?), so you can start to the left. Another problem might be that that guy didn't know you can tilt the plane using left and right. He probably expected it to lift off by itself (maybe we need to implement that).
Quickreply ClonkonautReply

Unfortunately, these changes are not featured  by the newest snapshot. :(
For some reason, no snapshot got made for my commit.
Quickreply ClonkonautReply

By Maikel Date 2017-01-02 18:37
Then it is good that the parachute mode needed a small fix, I hope I triggered the snapshots.
Quickreply MaikelReply