This is the castle package. It contains a lot of castle elements and two scenarios 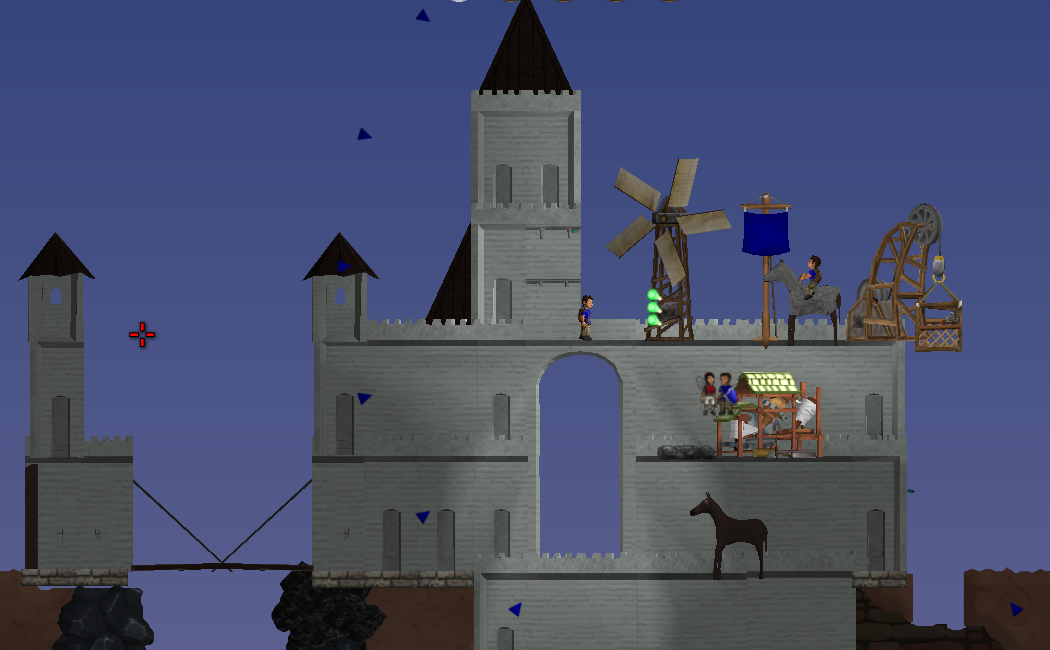 Help and some tipps
* When building use the space key to change direction of the building
* In melees build a flagpole first to buy stuff
* Hold Space and press left or right to go downstairs a tower
* Press x to go downstairs a staircase
* Doors can be opened with Space + Left/Right, Drawbridge can be opened with Space+Up/Down
* You can use the bow when sitting on a horse

Very good! The alignment could make use of the already existing connection feature (like basements can be attached to each other). That you don't need to script all stuff yourself and it's already working with existing systems.
Quickreply ClonkonautReply

By manuelclonk Date 2019-02-03 20:59
Thanks for the reply. This feature looks promising for bridge like elements especially. However, I started looking at the WoodenBridge and Basement scripts and both make use of
IsBelowSurfaceConstruction() { return true; }. If I set it to false it is not possible to place the object in the air anymore. If I set it to true the construction site falls down somehow during construction (left side): 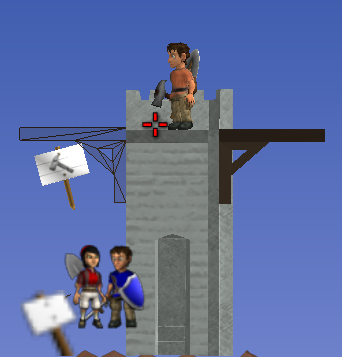 Will try to implement it for normal castle elements however!
Quickreply manuelclonkReply

IsBelowSurfaceConstruction is a special functions for construction that can be placed below the surface of the landscape. Like basements do whenever you build them below another construction. The construction previewer (what you place when selecting the hammer) will try to place the construction site deeper down if it's set to true. Also, when the construction starts (all building material present), there will be no landscape obstruction checks. But it has nothing to do with the sticking feature of connecting buildings.

The construction site itself does not fall down (because it's a StaticBack object). But it of course creates the building at some point (all building material present) and starts to build it. Because the building is created with Con 1 and not 100, Initialize will not be called. In order to have your buildings float, you need to do something about that in Construction() or in CombineWith(object) - which is called as soon as creation is done and tells you which other building this one should stick to. Of course, this means to change the category to StaticBack or similar techniques to make it float (e.g. the basement changes to StaticBack in Construction()). Otherwise it will fall down because C4D_Structure objects do that.
Quickreply ClonkonautReply

By manuelclonk Date 2019-02-04 20:39
Thank you so much for the good explanation! The structure from the screenshot can be connected to the tower now. Will work on the connection feature for the remaining structures next :)
Quickreply manuelclonkReply

Edit: Both FlipDir=1 and NoConstructionFlip=False are set in order to allow direction change before building using the spacebar
Edit2: Okay, I ended up creating an extra invisible object for the door control...
Quickreply manuelclonkReply

By Armin Date 2019-02-05 19:17
When I overcome my Blender problems, I'll upload an updated version of my castle decorations pack, too. They will likely fit into your castles.
Quickreply ArminReply 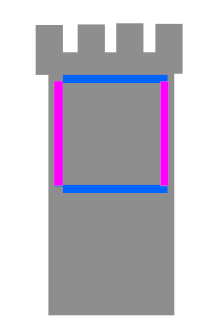 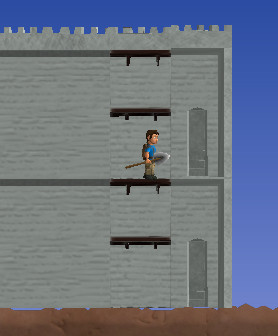 For movement in staircases, I think <Space> + <Direction key (WASD)> to move up/down or even sideways would be nice. I don't think the clonk should even have to "enter" the staircase (like in CR). It could just be teleported if you press Interact+Direction.
Quickreply Sven2Reply

>Question that remains: How to walk down?

Date 2019-04-01 14:14
I had a thing somewhere that allowed arrows and bullets to permeate half-solid masks in any direction. But that still leaves flints and other weapons.

Also, I'd like to know… how does this feel? Does it allow to move smoothly?
Quickreply CaesarReply

By manuelclonk Date 2020-02-03 20:52
I was thinking about creating some peaceful castle scenarios which can be also played in single player mode - Some options would be

- Horse Race Downhill: Like the parcour scenarios but with a horse
- Babel: Build a tower with castle elements up to a certain height. With lots of meteorits, lightning, monsters and rain falling from the sky and trying to stop the player

Will start with one of the two options, anyone having any favorites or other ideas?
Quickreply manuelclonkReply

A single player scenario would be cool. What about a castle invasion (like the last OC mission)?
Quickreply Sven2Reply

Date 2020-02-08 05:13
New item. Metal shoes. (Is it easy to stop climbing/walking/kneeling/etc… from changing to swim in water?)
Quickreply CaesarReply

By Marky Date 2020-02-08 08:20
Yes, you can temporarily change the ActMap property, so that the InLiquid Action is nil. At least that is how the walk speed is increased/reduced by certain effects
Quickreply MarkyReply

Just a small testmap and proof of concept. Far from finished. Feel free to make the script better. The hydroclonk has a male and female skin and depends on the gender of the chosen standard skin. Press the *Crew Member Toggle Button*while jumping to toggle between swimming and underwater walking mode.  Needs Castles.ocd.  Should work with the latest snapshot. (I think the fish was from Marky and the shark from arminlc, but not really sure anymore)
Attachment: WH_HydroclonkTest.ocs (3306k)