I hereby license the file Screenshot077.png under the CC-BY license

I hereby license the file Screenshot074.jpg under the CC-BY license

If you wonder why it took so long: I just didn't find out where the Amethysts were. I thought they are on the ground like the rubys as well, but I was wrong.

You don't really have to build a tunnel to the ground, though.
It's also possible to just build some air bubbles (with wall kits and the pump) and dive the rest :)
Quickreply ZapperReply

Yeah, but you'll still die a lot due to the piranhas ;)
Quickreply K-PoneReply

A finished round of "Miners' Rescue"

I hereby license the file Screenshot087.jpg under the CC-BY license 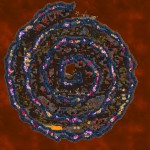 I hereby license the file Screenshot061.png under the CC-BY license

Lots of people at work

I hereby license the file Screenshot111.png under the CC-BY license

I hereby license the file AboveLavaflow.png under the CC-BY license

Yay, my dead clonk in the lava to the left...
Quickreply K-PoneReply

First bugs after the great OpenGL 3 transition produce some really nice artwork (happens after I place a construction site in editor mode):

This was surprisingly difficult...

We got a super fancy acid basin though!

The scenario starts out really easy: dig a bit, blast a bit of granite, find the acid. Figuring out how to build pumps and basins to get the acid through isn't hard either.

At some point when trying to get energy into the mine you hit the "no build"-zone near the crystals. There is very little feedback about why you can't build there, it somewhat feels like a bug.

The scenario would benefit a lot from a guide NPC like in some of the other missions. Maybe one near the crystal barrier explaining why you can't build there and another one near the acid lake giving a tip about energy generation with the pump.

These things are obviously written in the description, but few people read that thoroughly enough on the first try.

We also thought that the landscape is a bit boring. Flints are mainly below the base. In the mine, there is only a lot of stone and lava with very large spots of coal, ore and gold in-between.
Quickreply LuchsReply

-it would be great to build chests to store some items in the mine, in the lack of it we decided to gather things on certain spots.

-the landscape is boring: Some ideas: Mushrooms, Cave mushroom trees, mix the biiig material basens with some smaller ones. There are close to no objects scattered in the earth.

-I hated to go long miles to gather flint, because there were no small flint segments anywhere.

-K-Pone who has dyschromatopsia (Rot-Grün Schwäche) said it was nearly impossible to distinguishing the source and drain pipes from the pumps.

-To make it more newbie friendly: There is no easy gold accessable, it only comes after lava and granite - so newbies cannot buy a second Clonk before they die I guess.
Quickreply alaReply

>-K-Pone who has dyschromatopsia (Rot-Grün Schwäche) said it was nearly impossible to distinguishing the source and drain pipes from the pumps.

Small arrows on the pipe might be more self-explaining than colors but they depend on the zoom factor and it's an Engine thing...

Date 2016-05-30 13:29
And another thing came to my mind:
Probably a much simpler water-powered scenario would be interesting for newbies. If anyone remembers "Habachtal" from the ClonkCenter (webpage is down unfortunately): A water source on a mountain slope generates a stream which flows downhill.

In a scenario like this with windmills disabled, pumps would be the sole power source but would work just fine. Could even be a tutorial mission.
Quickreply alaReply

Beautiful! Is it actually possible to change the color of just one specific material with that function? (e.g. black gold- the example in the CR docu which never worked)
Quickreply WipfhunterReply

According to Sven, this used to be possible, but was replaced with a single modulation for the whole landscape at some point. Anyways, that would be a lot more work and would also mean even more overhead for the landscape shader which we probably do not want for such a little-used feature.
Quickreply LuchsReply

Ah- thanks for the info.

>Anyways, that would be a lot more work and would also mean even more overhead for the landscape shader which we probably do not want for such a little-used feature.

You're probably right. If someone needs another color, he can still introduce a custom new material and exchange the material "gold" with e.g. "blackgold" with some material replacement function.
Quickreply WipfhunterReply

I hereby license the file Screenshot153.png under the CC-BY license

Will it be possible to create objects in front of tunnel material but behind solid material anytime soon?

>Will it be possible to create objects in front of tunnel material but behind solid material anytime soon?

What do you want this for? This was a feature wish of the 1. milestone as well but did not get the needed developer support. I think ck and Mortimer both at least thought about it a little bit ;)
Quickreply alaReply

By KKenny Date 2016-06-23 10:25 Edited 2016-06-23 10:29
Right now the backwall tiles are objects and will be drawn over every solid material. For example if you build a loam wall it will disappear behind the tiles. Isn't this also an issue with the current structures?

Date 2016-06-25 19:13
Looks cool. What about generating these BrickBack objects automatically when building the Brick objects? I fear that ppl wouldn't draw such nice pillars or background walls if it is not needed and they only need a safe castle.
Quickreply ArminReply

I also want to draw the brick back automatically. But Kenny says it inhibits his inner artist.

You need the pillars because otherwise everything goes poof.
Quickreply ZapperReply

I want this backpack in OC

I hereby license the file Climb.png under the CC-BY license

I hereby license the file Waterfall.png under the CC-BY license

I hereby license the file ChineFinish.png under the CC-BY license

Date 2016-07-16 13:26
Isn't it possible total create smooth and fluffy water effects on the waterdrops ( not giving it a drop shape but probably draw sprite states on their speed or make them round and blobby)? That would add a nice feeling too these sort of scens. is it possible to create a drop. Sound on these which adds up to a stack and gets modified with the size of the stack to create a dynamic gradient between single and distinctive sound and the calming atmosphere of rain and waterfalls?
Quickreply ApfelclonkReply

>is it possible to create a drop. Sound

Rain sounds were on the sound request list. I edited rain recordings and put them to the resource repository around half a year ago. This file is supposed to increase and decrease in volume depending on the amount of rain. Still a scripter has to implement it.

Your suggestion is more elaborated. We indeed did a couple of single water drop sounds (also need to be implemented), but they were intended more for drips and drops (especially in caves). I'm not sure whether we should try to simulate the sound of rain via thousands of rain drop sounds, sounds like a lot of effort. Would be interesting to hear how it would sound though, probably different from rain but still very pleasing.
Quickreply alaReply

>rain via thousands of rain drop sounds, sounds like a lot of effort

It did not exactly mean just add up drop sounds. More like a transition between single drop sounds and complete rainfall/waterfall samples by the amount of raindrops/sec near the player. For sure just using one sound for each drop would work similar, but I think that single drop sounds should sound sharp and clean/exposed, while the detail should get lost on an increased amount of drops and on the other hand create an imaginary volumn (doesn't know wether that sounds correct, but maybe you get my point). So one should probably transition between sound samples or just add a smooth/washy filter on a higher amount of drop sounds.
Quickreply ApfelclonkReply

Date 2016-07-16 17:45
Yes, that can probably be done. But it would be quite some effort, and honestly I'm not too motivated to go into that direction and would suggest sticking to the 'low effort solution' proposed above (actually it wasn't and needed an engine request when Sven improved sound possibilities).
I also once felt like Open Clonk would be the perfect game to build a very rich audio environment with tons of sounds. Also this could set it apart from other titles since this has been neglected by a lot of other games.
The thing is - I already spent like a hell of a lot of time on that - and most of the sounds that are finished are not even used. So why make even more? The todolist would just get longer, we would not necessarily get more sounds anytime soon. I cannot even blame the developers, since obviously there are more important matters than sound. Wish we just had more programmers :/
Quickreply alaReply

Yes, that's becuase I've recorded from desktop. So I could either put in the ingame AND TeamSpeak sound or simply mute the original audio track. To get some recordings without the TeamSpeak voices, I might run TeamSpeak on a different machine or use something like Virtual Audio Cable to separate the recorded sounds.
Quickreply K-PoneReply

I hereby license the file Screenshot230.jpg under the CC-BY license

I hereby license the file Screenshot271.jpg under the CC-BY license

I hereby license the file Screenshot268.png under the CC-BY license