As Zapper mentioned a loom as well as a spinning wheel could be combined to get one single construction. That construction needs to processThe following model is not poly optimized nor final state.

http://wiki.openclonk.org/w/Settlement_Design_Document#Spinning_Wheel_.2F_Weaving_Loom (I don't know why its strikethrough)

I hereby license the file wheel.png under the CC-BY license

I hereby license the file wheel_1.png under the CC-BY license

I hereby license the file wheel_2.png under the CC-BY license

At the moment, the only thing, that would move is the wheel, right? And that's just the same like in the sawmill.
Have you seen Wallace and Gromit? There is an episode, where they have a Knit-o-matic... It has these arms, that move around and go in and out of some kind of bowl. It looks very interesting when the arms move that way. 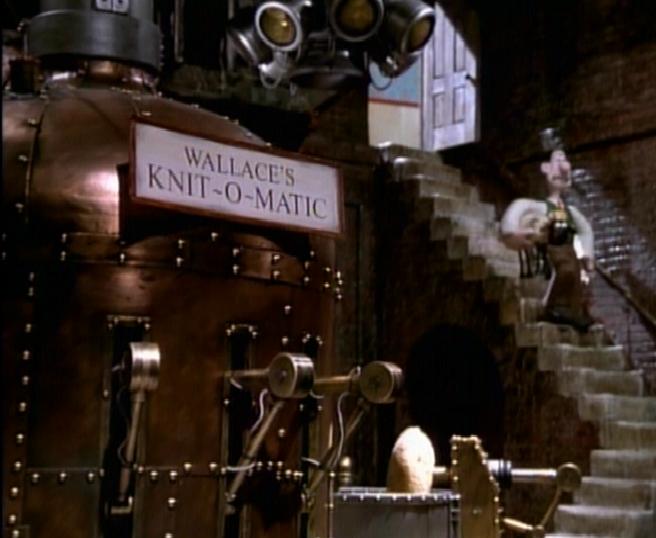 No, that board with the strings would also move up and down. The fabric (with a more neutral color) could also spin.
Quickreply DragonclonkReply

Cool, I think the more animated parts an object has, the better. Even if it's idle, the textile could wave in the wind.
Quickreply PyritReply

Mhm. I am very fond of Matthi's model. And it was never the idea to have two seperate buildings but one that makes cloth from cotton regardless of the look / name.
Quickreply ClonkonautReply

It was - I believe Matthi even created his model with that intention. But I have to admit that I completely fortot about his model.
Quickreply ZapperReply

The other repository. I ain't got the .blend file.
Quickreply ClonkonautReply

The loom is not usable right now, I can't view the model ingame. Got that well known No-Graphics-Error.
Quickreply DragonclonkReply

Don't know about that. Possibly I did something wrong back then, I just dumped the model in there (thought someone might supervise it later).
But apart from that you can of course always use Ogre Meshy to view .mesh files ->

Still kinda looks half-finished to me. If I didn't know what it was, I'd probably guess it was some mysterious construction - maybe to gain energy from earthquakes.
I would probably not guess that it was a loom.
Quickreply ZapperReply

I agree with Zapper here. I mean, it looks nice but... its just a cog animation. On the CM, I thought that it is an early work in progress and that it will only be a small part of the complete model.

Dragonclonk's sketch is much more clear in what the machine does.

Perhaps the cog animation could be integrated into Dragonclonk's idea. Even some models of the spinning jenny of which Dragonclonk's model is clearly inspired do have wheels/cogs at an angle, for example this one: http://historycanbefun.com/pics/the-industrial-revolution/Spinning_jenny.jpg
Quickreply NewtonReply

In case Matthi had the model in his dropbox during the CM, I can check whether I have it this evening.
Quickreply ZapperReply

PS: He did and that means I have a version of the model.

I don't know whether it is the newest one but I don't think Matthi worked on that after the CM, so it should be.
Quickreply ZapperReply

I haven't seen these screenshots before, huh. Is the model posted somewhere? Can you do that?
Quickreply ClonkonautReply

PS: to rephrase: Matthi's model doesn't look like a spinning wheel, but Dragonclonk's model is a bit too conservative for my taste - it's all straight beams etc. The same mistake that I did for my first placeholder-model, which didn't look whacky at all
Quickreply ZapperReply

Agreed. But consider that the thing Dragonclonk posted was just a sketch. His sketch could use some productive feedback what to improve. You already mentioned one thing. Does anything else come to your mind?
Quickreply NewtonReply

What I like about his model is that you immediately recognize what it is. I could place someone who never played Clonk in front of that and he would say "Well, I guess something to create cloth"

Hm, just brainstorming a bit - a cog wheel as the spinning wheel? Maybe some sort of "(steam/power-) engine" that shakes around if the wheel is active?
Quickreply ZapperReply

Yes a bit more engine technique would be fine, but when I hear loom or spinning wheel a more or less fragile construction comes in my mind not a massive steam engine. You would need a big sign attached on this construction to clarify what it produces.
Quickreply DragonclonkReply

Why? An engine could be attached to your model. It would still be clear that it does something with cloth. I did not mean a huge engine instead of the building. I meant something small to justify that the spinning wheel is moving.
Quickreply ZapperReply

Because a non-round wheel usually contain an unbalance, which leads to more stress on the axle.
Quickreply Sven2Reply

Aren't you a neurophysician! What would YOU know about wheels!

Date 2013-01-30 17:55
Round wheels also are a lot harder to make. Especially with whacky tools.
Quickreply CaesarReply

Ultimately, there is no objection against my idea? I'd also include Zappers idea of a steam engine and translate it to a low poly model this weekend.
Quickreply DragonclonkReply

My main remark is still that it's not really whacky enough :)
Quickreply ZapperReply

What do you mean with whacky? The design now will be more industrial than CR-like.
Quickreply DragonclonkReply

"generally not looking as if any sane person would construct that". You have straight beams, a solid construction. I'd vote more for a style that looked like someone constructed it quickly with a hammer out of wood. Maybe some more steampunk-ish elements (the generator f.e.), too
Quickreply ZapperReply

don't let the wheel move in a smooth motion! let it wobble (maybe only when turning on and off?)
Quickreply kerReply

Right. The whole construction will be cobbled together. ;) But animations have to wait because I need to learn how to animate in blender (better export support). At the moment it's not possible to animate in Cinema 4D for OC-Ogre.
Quickreply DragonclonkReply

Quite some time ago I did a short sketch but never posted it.
Here it is. Date 2014-03-24 18:07
Next time, you should write a warning because of the loud noise in this video.
Quickreply Link-MarioReply