A suggestion what a lightning cannon could look like. If it is implemented anyway. 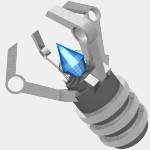 You can say that it must be used only for no commercial uses, but not it belongs to me. Or are i am mistaken?
Quickreply MrBeastReply

OpenClonk will only use artwork that can be used commercially, for various reasons: Maybe we need to display advertising to pay for servers or something some day, or some magazine wants to include the game on a DVD, and lots of Linux distributions only accept Open Source software, which also has this requirement. We will make this requirement a precondition to upload attachments, but first we need to figure out which license we'll use for artwork. So far, no artist has voiced a preference, and guessing which choice will put off the least people is very, very difficult.
Quickreply GüntherReply

I am OK with Creative Commons Attribution License. I have edit my posts to put my work under this license. But we will have to make a license(.txt) list with all the contributions anyway since the copyright holders of each artwork (and the license) have to be mentioned in any case as long as it is not Public domain. To mention some exceptions for example for textures from limited free sources like ImageAfter ("you CANNOT REDISTRIBUTE our images and textures as part of an online resource site like our own, i.e. use them to directly compete with us.") wouldn't be a problem then.
Quickreply NewtonReply

> To mention some exceptions for example for textures from limited free sources like ImageAfter ("you CANNOT REDISTRIBUTE our images and textures as part of an online resource site like our own, i.e. use them to directly compete with us.") wouldn't be a problem then.

Well, no, that's clearly not open source. If we accept contributions which have more restriction than others, those who only granted liberal licenses to get their work included will feel disadvantaged.
Quickreply GüntherReply

You do not get very much for contributing to an open source game: A better game, and an entry in the credits. For that, you have to give up most of the monopoly rights granted to you by the copyright laws around the world. That is easier if everyone gets the same deal and nobody gets a better one. An example: You may want to include stuff that is not free software, I would like to include code licensed under the GPL. We cannot both do that because the GPL requires that there are no pieces with more restrictions than the GPL has, so we have to compromise. Requiring very liberal licensing with neither "sharealike" restrictions like CC-by-sa and GPL nor restrictions which would prevent the result from being free software is such a compromise.
Quickreply GüntherReply

Date 2009-04-18 14:44
I tried to make some preview rendering how I would make a lightning cannon, but actually it is looking terrible =(
In this image by Martin Adam I somehow miss the electro-look. No tesla-coils, no wires, just a saphir on some cylinders.

>In this image by Martin Adam

Sounds you didnt took that I am this person. x)

For this model I spent only 10 minutes and due to it is not very detailed. :/
And it is more "magic" and less electro, thats right.
Quickreply MaddinReply

Perhaps you should put that information into your profile ;-P
Quickreply NewtonReply

>Sounds you didnt took that I am tis person. x)